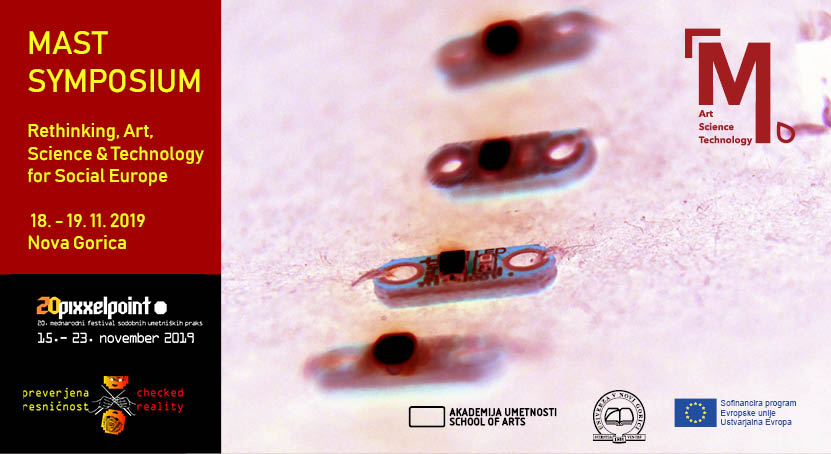 The MAST symposium (18. & 19.11.2019, ex-Daimond (xD), Nova Gorica, Slovenia) seeks to address an open variety of topics among Art, Science and Technology, discussing them through different prisms of the festival topic — “Checked Reality. The Work at the Interface Continues”. 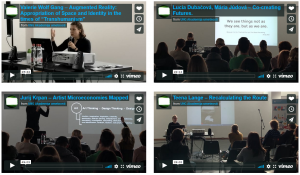 11.00 – Lucia Dubačová, Mária Júdová – Co-creating Futures.
In the super-connected society, how can we facilitate environments for an individual and communities to discover and activate their own potential for creative self expression and challenging of values? How can interactive artworks stimulate this process of seeing and discovering new perspectives? This session will start with setting a contextual background for these questions and evolve into a conversation with artist Mária Júdová about her new VR piece Kykeon.

12.00 – Teena Lange – Recalculating the Route
A lecture performance on the idea of a mobile research space. Since November 2017 the project space grüntaler9 aims to leave it’s base Berlin (since 2011) and perform in form of BYS229 within Europe, questioning forms of mobility, performativity, hosting and encounters. An interim report.

13.30 – Anja Ibsch – Van Gogh TV – Piazza Virtuale (working title).
In the supporting programme of documenta 9, 1992, the media art collective Van Gogh TV presented its project “Piazza Virtuale”. The group was formed in the mid-​1980s and consisted of American, German and Austrian media and performance artists and technicians. Its aim was to develop a collaborative media practice that would enable media consumers to actively participate in programming. To this end, Van Gogh TV built up a network of television stations throughout Western and Eastern Europe and Japan, and during the documenta every night broadcast several hours of television programmes that had previously been produced with the assistance of international artists and various media techniques.

14.00 – N. Bovcon (U. of Ljubljana), A. Vaupotič (U.of Nova Gorica) – Augmented reality and Chronotopicality.
The reality-virtuality continuum (Paul Milgram et al., 1994) establishes a foundational mixed reality as a spectrum of intermediate options. The ICT based databases are increasingly superimposed on and integrated in our life-world. The new media art – and contemporary media in general – can be seen through two points of view: the technical aspect where the reality is supplemented by (3-D, networked) computer-based data. Secondly, the augmented reality can be construed as a real superimposition of different realities, that is foregrounded using Mikhail Bakhtin’s notion of chronotopicality.

14.30 – Vuk Ćosić – Thesaurus of missing expressions
The location of the drama is the circular junction between arts science technology and society. The drama itself looks very different to all actors. To many it is a quest for money or power, to some it is a quest for meaning but to most it’s a quest for leave me the fuck alone. To help further confuse the debate I will introduce some missing expressions that might make the paradoxes and anomalies in our drama even worse.

15.30 – Daniela Urem – The Future of Higher Education
The future of work equals the future of higher education. Integration of what has traditionally been kept separate at the universities requires new forms of transdisciplinary approach. It calls for a curriculum that together with AI, analytics, augmented and virtual reality, cyber defense, etc. will integrate ethics, cultural competence and emotional intelligence as empathy, compassion and understanding.

10.30 – Lavoslava Benčić – Integrated Practices in Art and Electronics.
Lavoslava Benčić will talk about her pedagogical work in the field of art and electronics with an emphasis on e-textile workshops.
She will cover topics such as venue selection, topics and techniques definition, pre-production of the workshop, adaptation of the methodology to the target group, time and cost management and risk management. She will give some examples of the results of the workshops.

11.00 – Jernej Č. Gerbec – Interface as Mother Tongue
What even is an interface? This time I will ramble on about buttons, mouse pointers, scissors, words we use and our relation to things and programs. In a time when we spend more and more time with virtual interfaces it wouldn’t hurt to address our relationship with them. It is not an intervention, it is not a crisis, but maybe would be nice to know where we stand.

11.30 – Helene Thuemmel, Nayari Castillo-Rutz, Franziska Hederer – Educational Practices between Art, Science and Technology.
A (Video) Conversation
In a previously recorded conversation the longtime colleagues and collaborators Nayarí Castillo-Rutz, Franziska Hederer and Helene Thümmel reflect upon their experiences in the field of arts education and discus around different pedagogical approaches to contemporary art and architecture. Based on the Institute of Spatial Design of the TU Graz, all of them are also an active part of the MAST program. Additionally, they have been involved in various educational programs and approaches. Within the conversation, they will not only share experiences but try to draw a rough draft towards where contemporary education could go, especially taking in consideration the last years topic of MAST, “The Future of Work” and the future challenge: “solidarity”.

12.00 – Robertina Šebjanič – Sounds of a troubled world’s = Underwater Interception of aquaforming.
“There are still songs to sing beyond mankind” (Paul Celan)
Robertina Šebjanič will talk about her research-based art practice that deals with cultural, (bio)political and ecological realities of human imprint on aquatic environments and its consequences / challenges.
Her series of works range from working on: animal-machine-human relationships, regenerative medicine, inter-species communication (Aurelia 1+Hz), and pointing out underwater noise pollution and its ecological consequences (Aquatocene); illuminating the invisible anthropogenic pharmaceutical chemical pollutants – residues of human consumption and (aqua_forensic) .

13.30 – Robert Manchin – Culture wars and wars for culture
The talk will review the global political context of the European cultural policy — in the context of the dilemmas facing the new European Commission.
A few early signs point to the shifting strategic priorities from a “political” Commission to a “geopolitical” one. The question arises for cultural organizations on how they would fit into this new policy environment. What is the role of and possibilities for cultural policy organizations and how can they represent and advocate for the overall interests of artists and for cultural activists. An early test of the place for culture in the priorities of the new Commision is the grassroot reaction from the sector to the fact that there is no mention in the job titles of Commissioners of “culture” “research” or “education”.
We will review the first reactions and speculations about the ongoing and shifting boundaries of the interactions between the war FOR culture and the culture wars within Europe as well as globally. Finally we might open for a short discussion about the possible consequences for projects like MAST.

14.00 – Allan Siegel – Facing the Interface
In this first quarter of the 21st Century humanity faces a tsunami of visual allusions and cryptic formulas regarding how one can manage to validate of what is real and what is fake.
Daily routines are commodified and catalogued in invisible forests of digital memories; the most vivid representations of daily life are scrutinized for truthfulness or blandly accepted as facts; the tragedies of life on the borders of survival become subliminal abstractions; and yet we are overwhelmed by the manifestations of a planet plummeted by ecological crises.
Thus, we are searching for a collective compass, a communal map, to invigorate and refine our capacity to navigate the blurred margins of the artificial and the real and to give substance to notions of human solidarity.

14.30 – Chris Csikszentmihalyi – Art & Tech vs. SciArt
In this talk I will describe how the threads of art, science, and technology are woven in different ways, with two major patterns (art+science or art+tech) that have run in parallel, though often inter-braided, over the last two hundred years. These two projects, very different but often conflated, have different epistemological frames, and different power and knowledge relationships between art and the second domain. I will refer to the empirical disciplines of History of Technology and Science, Technology, and Society to ground this comparison. Spoiler: one approach is better than the other.

15.00 – HEALLO – The unmaking of art
From acknowledging the “unknown forces” behind the apparatus of Contemporary Art, this lecture performance creates a platform for stepping into the unknown. Fluid in shape and “unpredictable”, all and everything is part of the game.

15.30 – Laure Keyrouz – //Laure Keyrouz.
As a parallel component of my phd studies in post-civil war Lebanese contemporary art and literature, the basic structure of the web-based CHAL project (in its experimental phase) will be presented. In order to provide a network and map connecting Lebanese artists, writers and their works, this project aims to create an interactive digital ‘archive-in-progress’ based on interviews of artists, writers and experts, as well as digitized books, texts, videos and images. The challenge to be faced is how to translate previously made face-to-face encounters with artists and writers into future active and dynamic encounters made through a virtual platform.