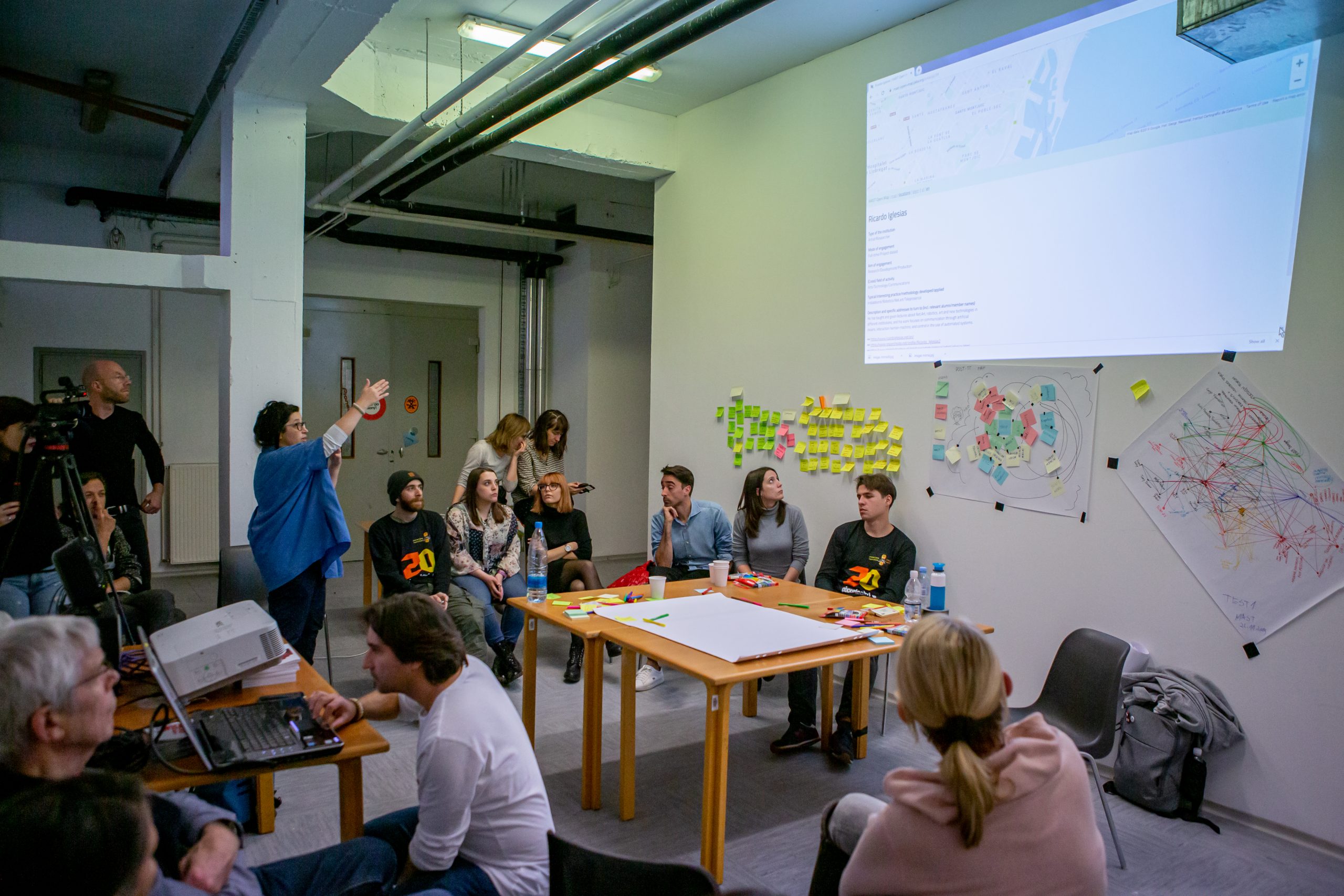 A practical workshop activity that brings students to understand the world they will belong to after finishing their studies such as the MASTmodule.eu, or any other career perspective among Art, Science, and Technology. By producing an openly accessible map in the public domain , the workshop addresses both artists and non-artists who might become “innovation catalysts” in the A-S-T ecosystem.

The key activity of the workshop was to map the most meaningful (Social-Europe relevant) ArtSciTech institutions, practices, and methodologies. Within the ambition of (re)thinking the future in broader terms, the participants have also been challenged to envision their own current or future positions, perspectives and not least their identity. The map is available here https://mast-open-map.jaka.org

Facilitated by expert mentors in the relevant fields, students have worked individually and in small groups to create a joint mapping of A-S-T relevant locations, institutions, names practices and methodologies, as well as define the right form(at) of such mapping. The map (based on a custom-developed open-source software, Jaka Železnikar’s “Open maps”) has been presented on the last day of the workshop within the Pixxelpoint 2019 festival and has been cleaned up subsequently to enter the MAST module resources legacy and stay in the public domain as an open, expandable resource.

Next to their expert mentors, the groups were consulted by the producers, artists, and interdisciplinary creatives present at the festival, several of them appearing in the MAST symposium that took place two days beforehand. The maps are to show how connecting people, institutions, locations, consortia, networks, alliances, concepts, methodologies, ideologies, etc. may contribute to a meaningful and sustainable innovation within the A-S-T practice, and guide the MAST graduates along with their careers.

On Tuesday 19.11. within the MAST symposium, Jurij Krpan (MAST/Kersnikova)
has spoken about “ Artist Microeconomies Mapped ” at 11.00. At 12.00 Robertina Šebjanič
has spoken on ” Sounds of a troubled world’s = Underwater Interception of
aquaforming ” while at 13.30 Robert Manchin has spoken on ” Culture wars and wars for culture “.

This MAST workshop might connect with the simultaneous RELOGIA |ART+SCIENCE+TECHNOLOGY workshop to exchange experience and comment mutually on the results: http://relogia.net/workshops/

Robertina Šebjanič (SIovenia) based in Ljubljana. Her art – research focus is since several years into cultural, (bio)political, chemical and biological realities of aquatic environments, which serves as a starting point to investigate and tackle the philosophical questions on the intersection of art, technology and science. Her ideas and concepts are often realized in collaboration with others, through interdisciplinary and informal integration in her work. She is a member of Hackteria Network and Theremidi Orchestra. She was awarded with Honorary
Mention @Prix Ars Electronica 2016, STARTS2016 nomination and nomination for the White Aphroid award.
Robertina was SHAPE platform 2017 artist. 2018 she was a resident artist at Ars Electronica (EMARE / EMAP). Her art work Aurelia 1+Hz / proto viva generator (artist proof) is since 2019 part of the the BEEP Electronic Art Collection, Spain. She exhibited / performed at solo and group exhibitions as well as in galleries and festivals: Ars electronica Linz, Kosmica festival_ Laboratorio Arte Alameda_Mexico City, Matadero_Madrid, Eye film museum_Amsterdam,La Gaîté Lyrique_ Paris, Le Cube_Paris, Art Laboratory Berlin, ZKM_Karlsruhe, re:publica_Berlin, Mladi Levi_Ljubljana, Centro de Cultura Digita_ Mexico City, OSMO/ZA_Ljubljana, Device art 5.015 at Klovičevi dvori_Zagreb, Eastern Bloc_Montreal, Eyebeam_New York, PORTIZMIR#3_ Izmir, Spektrum_Berlin, KIKK festival_ Namur, +MSUM (Museum of Contemporary Art Metelkova)_Ljubljana and
more…. https://robertina.net/

is president of Culture Action Europe, the largest European network of cultural operators, advocating for culture. Born in Budapest, where he attended the Bartok Conservatory of Music, the Liszt Academy of Music and the Marx University of Economics. Worked at the Hungarian Academy of Science as  sociologist while playing in the State Philharmonic Orchestra. He studied and wrote books on youth musical protest movements and the long-term effects of music education in public schools. Spent several years teaching and doing research in American universities. Returning to Hungary before the regime change he organized samizdat publications including publishing the minutes of the transition parliament before the first free elections. Between 1990 and 2014 he fulfilled various top management positions at Gallup Organization in the US and in Europe leading a number of global research projects. As a professor at the College of Europe, developed a course to understand European social trends using survey and other data. During the summers he organize local musical events in Croatia and in the winters makes every effort to be present in his village council meetings in Hungary where he was elected as the Vice Mayor.