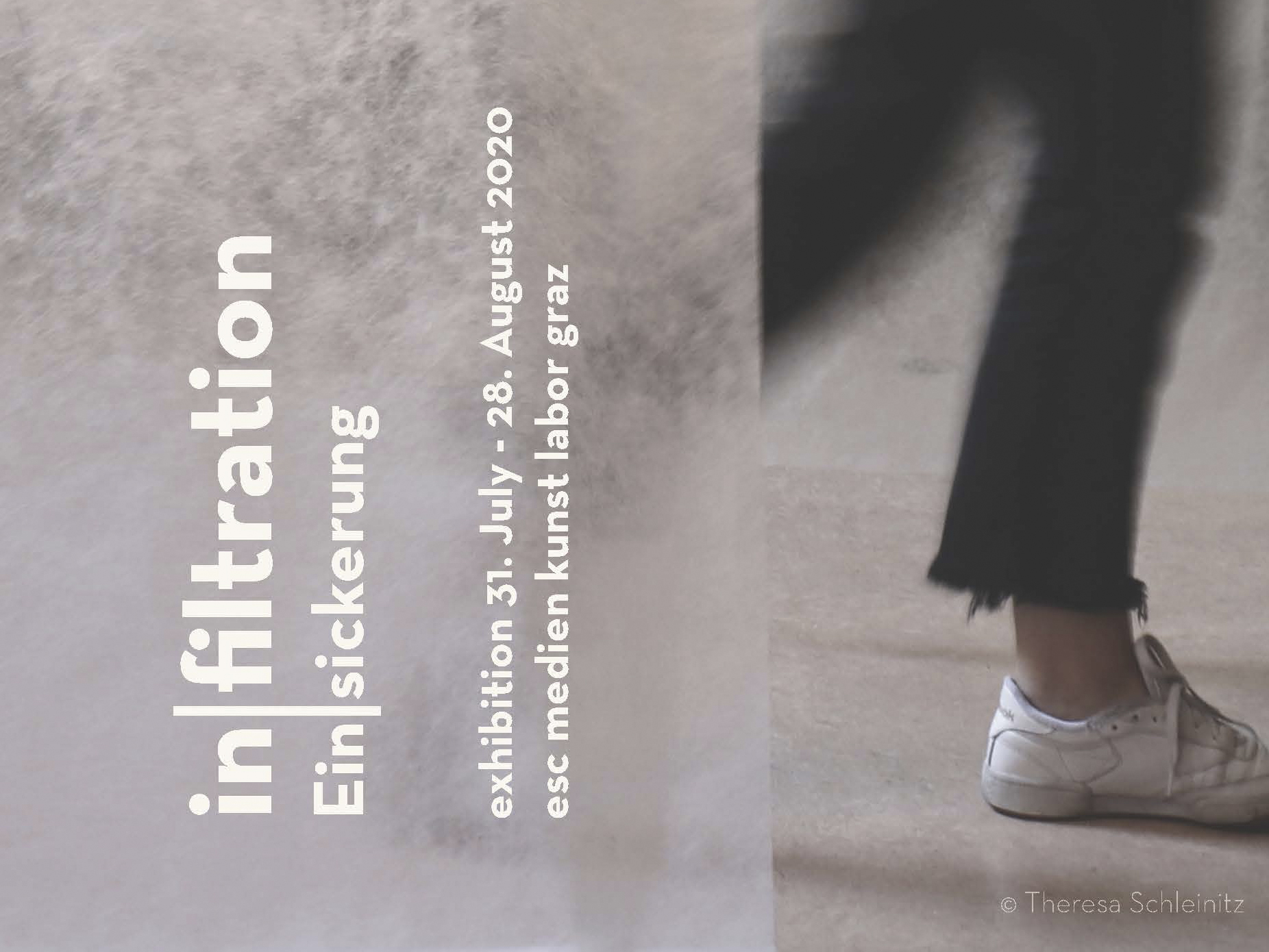 On 31 July 2020, the exhibition in|filtration _ Ein|sickerung was inaugurated at esc media art lab in Graz, Austria. It carried further the workshop and Intensive Learning Event ILE that took place in June 2020 under the title Stories of the Neighbourhood, and in the year before, in April 2019 under the title Algorithmic Space Studies, a collaboration between MAST and Algorithms that Matter (Almat). A generative space and sound installation incorporating the movement of visitors was developed at scale 1:1, based on a design created during the workshop. The exhibition foregrounded the interrelation of ArtSciTech, the human senses and spatial interference. It revolves around questions of boundary drawing and crossing, where persistent and inconspicuous infiltration through layers and membranes of seemingly separate actors and systems challenge and merge their identities. 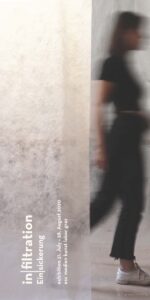 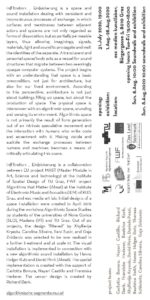 In|filtration _ Ein|sickerung is a space and sound installation dealing with persistent and inconspicuous processes of exchange, in which surfaces and membranes between adjacent actors and systems are not only regarded as forms of dissociation, but as partially permeable layers, thus allowing imaginings, signals, materials, light and sound to propagate and melt the identities of the separate. A translucent and sensorial space/body acts as a vessel for sound structures that migrate between two seemingly opaque computer systems. The project begins with an understanding that space is a basic precondition, not just for architecture, but also for our lived environment. According to this perspective, architecture is not just about buildings filling up space, but about the production of space. The physical space is interwoven with an algorithmic space, sounding and sensing its environment. Algorithmic space is not primarily the result of form generation but of an intrinsic speculative movement and the interaction with humans who write code and experiment with it. Making visible and audible the exchange processes between humans and machines becomes a means of critically articulating this space.

In this installation, the visual, sonorous and algorithmic spaces are partitioned into twelve segments along an axis, each of which is thus in contact with its neighbouring segments. While segmentation is often understood as a method of analysis—for instance in biology to disassemble organisms—it is here regarded as a form of synthesis and spatialisation, putting side by side without hierarchy. In the social realm, segmentary developments are often seen as problematic, as communities become enclaves isolated from each other, but the spatialisation performed here emphasises the “equivalidity” (gleiche Gültigkeit) over indifference (Gleichgültigkeit). When observing the world on global scale, perhaps general validity (Allgemeingültigkeit) is no longer a property sustained by contemporaneity. The question then becomes, how we can imagine new forms of infiltration, creating “weak ties” that have the potential to produce emergent shared meaning.

In|filtration _ Ein|sickerung is a collaboration between EU project MAST (Master Module in Art, Science and Technology) at the Institute of Spatial Design of TU Graz, FWF project Algorithms that Matter (Almat) at the Institute of Electronic Music and Acoustics (IEM) of KUG Graz, and esc media art lab. Initial designs of a space installation were created in April 2019 during the workshop Algorithmic Space Studies by students of the universities of Nova Gorica (SLO), Madeira (PT) and TU Graz. Out of six projects, the design “filtered” by Xhylferije Kryeziu, Carolina Silveira, Feni Susic, and Gaja Znidarsic was selected to be now realised in a further treatment and at scale 1:1. The visual installation is implemented in connection with a new algorithmic sound installation by Hanns Holger Rutz and David Pirrò (Almat). The spatial implementation is created with the support of Nayarí Castillo and Franziska Hederer. The sensor design is created by Richard Dank.

This interdisciplinary project is an experiment taking place within the debate on interactions between art, science, and technology. The exhibition is part of the Graz Cultural Year 2020  parcours Algorithmic Segments.

A collaboration between the Master Module in Art, Science and Technology (MAST) at the Institute of Spatial Design / TU Graz, and Algorithms that Matter (Almat) at the Institute of Electronic Music and Acoustics (IEM) / KUG Graz. Exhibition esc media art lab 2020, within the parcours Algorithmic Segments – Graz Kulturjahr 2020.